God’s Word for You

These places are between Mount Sinai in the southern part of the Sinai Peninsula and Kadesh (verse 36). Kadesh was an important stopping-place between the Wilderness of Paran (northeastern Sinai) and the Wilderness of Zin, which is the narrow high ridge just south of Canaan’s Negev or southern lowland. 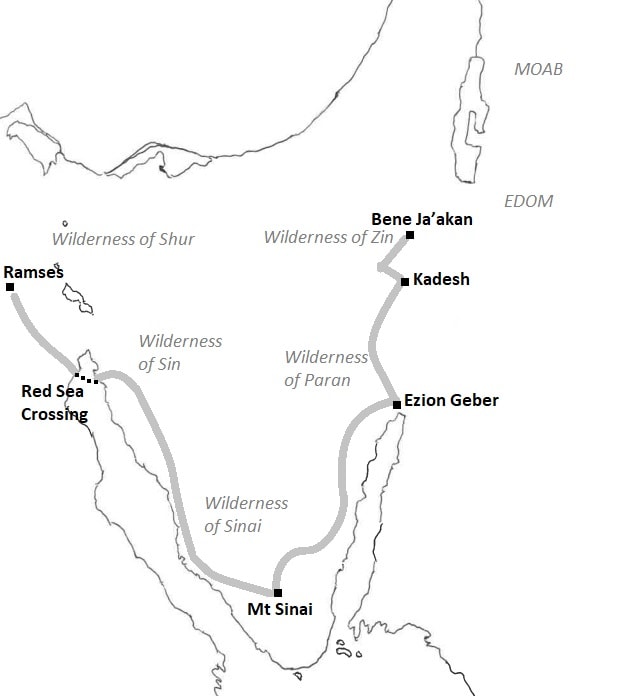 16 They set out from the Wilderness of Sinai and camped at Kibroth Hatta’avah.

Kibroth Hatta’avah (“Graves of Craving”) is the place where the people grumbled for food and the Lord sent them quail and a plague to punish their grumbling (Numbers 11:34-35).

It was at Hazeroth that Miriam and Aaron spoke against Moses on account of the prophet marrying a Cushite wife (Numbers 11:35 and 12:1). In Deuteronomy 1:1, Hazeroth is associated with Dizahab. This is probably the oasis of Ayn al-Hadra.

Medieval, Renaissance and Reformation-era maps often depict these cities as a long serpentine chain of points on rough outlines of the Middle East, usually equally distanced one from the next, with no real reference to any known places. The idea behind those maps was to show that every now and then, Israel stopped and camped. In many ways, I prefer those maps to modern revisionist theories that try to put Mount Sinai over in Saudi Arabia or in the far north of the Sinai Peninsula.

The truth is that we simply don’t know where most of these places were. We don’t need to assume that every single pool or oasis that God led Moses to 3,500 years ago would still be there to this day. If there was any permanent structure, pool, pond, or well, they’re just not there today. I sometimes compare these disappearances with the lake that once dominated my home town of Poynette, Wisconsin, in the 1800s, but which is the village athletic field today. It was there once, and no one can deny it, but it’s not there today.

When Moses recalled some of the events of the trip later on, he identified Bene Ja’akan as “the wells of the Jaakanites,” and he calls Hor Haggidgad by the name Hor Gudgodah (Deuteronomy 10:6-7). The one is Hebrew, the other closer to Aramaic (just as Golgotha is Aramaic for Ha-Golgoth in Hebrew, Mark 15:22).

Ezion Geber was a seaport, close to the location of present-day Eilat on the northernmost point of the Gulf of Aqaba, or the “right finger” of the Red Sea. Notice that in Deuteronomy 2:8, both Elath (“Eilat”) and Ezion Geber are mentioned together; both were port towns: Ezion Geber was the western port, Eilat / Elath was the eastern port. Israel’s move through or past Ezion Geber seems to have simply been a stop along the way to Kadesh, although they might have had to double-back toward the Gulf when Edom refused to let them pass through (Deuteronomy 2:8).

These were the days of wandering; the long years when the older generation of Israelites died because they listened to the fearful report of the ten spies and not the encouraging report of the two (Numbers 13:27-33). “They wandered in desert wastelands, finding no way to a city where they could settle. They were hungry and thirsty, and their lives ebbed away” (Psalm 107:4-5). But even though the people had sinned and were being punished for it, the Lord spared their souls. Their bodies would not enter into Canaan, but they would be brought body and soul into Paradise. As long as they lived, they were fed manna day after day (John 6:48), but they were also fed with the word of God. The word of God is the living bread, the Bread of Life: Jesus our Lord. If you are wandering these days, turn to the word of the Lord, and use whatever resources you have to take care of yourself. Remember the words of the prophet: “The Lord is good, a refuge in times of trouble. He cares for those who trust in him” (Nahum 1:7).