God’s Word for You

I use a capital “E” to remember the order (more or less) of the Seven Words or things Jesus spoke from the cross. The first, middle, and last items were spoken to God (these form the bars of the E-shape). The others were spoken to people around the cross, and those remaining four items follow the acrostic outline of the days of the week from Tuesday through Friday. That is to say, T is for “Today…,” W is for “Woman behold…,” Th is for “Thirst,” and F is for “Finished.” 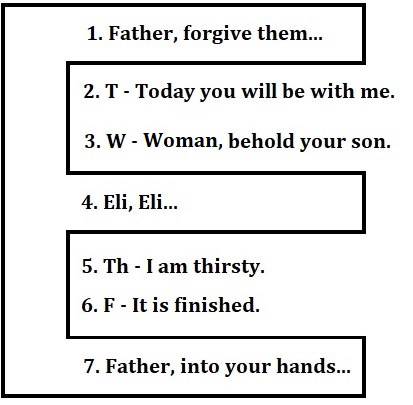 34 Then Jesus said, “Father, forgive them, for they do not know what they are doing.” And they cast lots to divide up his clothes.

None of the Gospels has all seven things Jesus said from the cross. Matthew and Mark each report the cry, “My God, my God, why have you forsaken me?” and its Aramaic original (Matthew 27:46; Mark 15:34). They both report that this happened near 3:00 (the ninth hour). Luke tells us that this first prayer, “Father, forgive them,” was spoken as he was crucified (nailed up) and the soldiers were casting lots for his clothing, which places it first in the list. Luke will also include something spoken to one of the thieves early in the process, at about the sixth hour (“Today you will be with me in paradise,” Luke 23:43), and Luke also reports the final prayer, “Father, into your hands I commit my spirit,” which he said just before he died (Luke 23:46). John fills in a few gaps. Sometime after the soldiers divided his clothing, Jesus spoke to his mother (“Woman, behold your son”) and to John (“Here is your mother,” John 19:26-27). Finally, between the cry “Eli, Eli!” and his final prayer, John remembers that Jesus said, “I am thirsty” (John 19:28) and, nearing death, “It is finished” (John 19:30). This gives us the order, more or less, of the Seven Words. I am not interested in disputing their order. I am only interested in their content.

He prayed, “Father, forgive them, for they do not know what they are doing.” This has an immediate context, and of course a broader context. Jesus is praying for the soldiers themselves, that God would not count this as a sin against them. These soldiers were still remembered when John saw his Revelation, when he said: “Look, he is coming with the clouds, and every eye will see him, even those who pierced him” (Revelation 1:7). David’s Psalm prophesied: “A band of evil men has encircled me, they have pierced my hands and my feet” (Psalm 22:16). And, foreseeing the soldiers gambling for the Savior’s clothes, David added, “They divide my garments among them and cast lots for my clothing” (Psalm 22:18). I’m sure the Romans didn’t see this as stealing. A condemned man forfeited everything including his life, and so they simply took his clothes as a small bonus to their pay for the duty. God warned Israel, “Your wealth and all your treasures I will give away as plunder… because of sin” (Jeremiah 17:3). And again, “A day of the Lord is coming when your plunder will be divided among you” (Zechariah 14:1). On account of sin, but no sin of his own, our Savior was himself plundered. His meager possessions, nothing but the clothes he wore, were gambled for and divided.

Yet Jesus was also praying for all mankind. His sacrifice is explained by these words: “Father, forgive them.” This was fulfilled in the act of his death, as Paul explains: “he forgave us all our sins, having canceled the written code, with its regulations, that was against us and that stood opposed to us; he took it away, nailing it to the cross” (Colossians 2:13-14). It may help us to understand the scope of this prayer and of the sacrifice itself when we consider the High Priestly office of Jesus Christ, according to the Theses of Professor Hoenecke:

2, The essence of the high priestly office of Jesus Christ is that the Lord by perfectly fulfilling the law, as well as by perfectly atoning for all our guilt, furnishes perfect satisfaction for all sinners, and on the basis of his satisfaction, he also makes intercession with God for all sinners (both for the godless, Isaiah 53:12, and for the children of God, John 17:9; Romans 8:34).

3, The atonement in general, and especially as it was carried out by Christ, was necessary for the redemption of sinners.

4, In his fulfilling of the law and in his suffering for us, Jesus really has made satisfaction and really conducts his high priestly office in both (“Christ died for the ungodly,” Romans 5:6).

5,The satisfaction that Christ furnished in his active and passive obedience for all is perfect and in itself sufficient for the redemption of all sinners. This includes weak Christians (1 Corinthians 8:11) and even unbelievers who “trampled the Son of God under foot” (Hebrews 10:29).

6, Christ is the true and the only Intercessor for us, and he remains such to the end of the world. 1 Timothy 2:5.

Jesus Christ came into the world to save sinners, which is to say, to save all mankind. Irenaeus of Lyons, a pastor of the late second century, wrote: “Christ came to save all men by himself; all, I say, who through him are reborn into God: infants, little children, boys (and girls), young people and old people.” Paul put it more simply: “Here is a trustworthy saying that deserves full acceptance: Christ Jesus came into the world to save sinners—of whom I am the worst” (1 Timothy 1:15). One of those sinners Jesus came for was me. And one of them was you. It’s our role in Christ’s kingdom to let everyone else know.